I hope I don’t get kicked out of Yale for this.

In January 2012, two Yale students named Harry Yu and Peter Xu built a replacement to Yale’s official course selection website. They it called YBB+ (Yale Bluebook Plus), a “plus” version of the Yale-owned site, called Yale Bluebook. YBB+ offered different functionality from the official site, allowing students to sort courses by average rating and workload. The official Yale Bluebook, rather, showed a visual graph of the distribution of student ratings as well as a list of written student reviews. YBB+ offered a more lightweight user interface and facilitated easier comparison of course statistics. Students loved it. A significant portion of the student body started using it.

Fast-forward two years. Last Friday (1/10/14), Yale blocked YBB+’s IP address on the school network without warning. When contacted, Yale said that YBB+ infringed upon Yale’s trademark. Harry and Peter quickly removed the Yale name from the site, rebranded it as CourseTable and relaunched. Yale blocked the website again, declaring the website to be malicious activity. 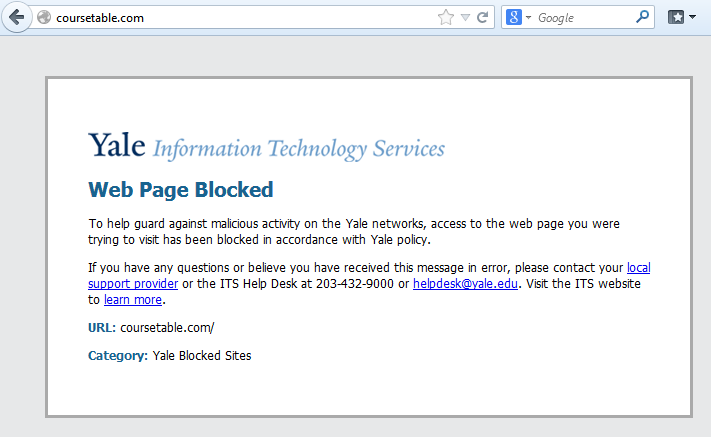 Later that weekend, Yale’s administration told the student developers that the school didn’t approve of the use of its course evaluation data, saying that their website “let students see the averaged evaluations far too easily”. Harry and Peter were told to remove the feature from the CourseTable website or else they would be referred to the school’s punishment committee.

Harry and Peter were told to remove the feature or else be referred to the school's punishment committee.

On Tuesday, Harry and Peter published a blog post explaining Yale’s censorship policy and the Internet exploded. The post hit the front page of Reddit and the top of Hacker News. The Washington Post and Techcrunch covered the story. Around the world, commentators decried Yale’s censorship as a freedom of speech violation. The world waited as Yale’s administration was silent for three days.

Finally, Mary Miller, the Dean of Yale College, wrote an open letter to Yale on Friday night. In this letter, she defended Yale’s decision to censor Harry and Peter’s website and course rating functionality, stating:

Worded less diplomatically, it appears the Dean of Yale College is expressing to students that, “You can use our course evaluation data, but only if you view the data as we tell you to view it”.

Before you get out your pitchforks, there is one more piece to this puzzle: Yale also told Harry and Peter that the CourseTable website infringed upon the school’s copyrighted course data. It appears to be true; CourseTable hosted Yale’s course descriptions and student evaluations, or, if not the exact evaluations, they at least hosted derivations of them.

This copyright assertion, however, reeks of hypocrisy and inconsistency. Yale Bluebook, the official course selection website, was originally a student-made website that used the same data as CourseTable. Apparently, the student creators of Yale Bluebook received a de facto license to use Yale’s copyrighted data when they designed their site in a manner that Dean Miller felt was “appropriate”.

The story does not end here, however, since there’s a way to distinguish the freedom of speech issue from the copyright claims. What if someone made a piece of software that displays Yale’s course evaluation data in a way that Yale disapproves of, while also (1) not infringing on Yale’s copyrights or trademarks, (2) not storing any sensitive data, (3) not scraping or collecting Yale’s data, and (4) not causing damages to Yale’s network or servers? If Yale censors this piece of software or punishes the software developer, it would clearly characterize Yale as an institution where having authority over students trumps freedom of speech.

Guess what? I made it last night.

I built a Chrome Extension called Banned Bluebook. It modifies the Chrome browser to add CourseTable’s functionality to Yale’s official course selection website, showing the course’s average rating and workload next to each search result. It also allows students to sort these courses by rating and workload. On the left is the original site, and on the right is the site with Banned Bluebook enabled (this demo uses randomly generated rating values). 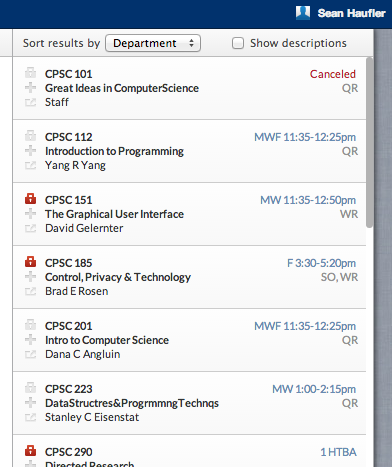 Picking classes at Yale: before and after

Censorship is not only unethical, it's also futile.

Banned Bluebook never stores data on any servers. It never talks to any non-Yale servers. Moreover, since my software is smarter at caching data locally than the official Yale course website, I expect that students using this extension will consume less bandwidth over time than students without it. Don’t believe me? You can read the source code. No data ever leaves Yale’s control. Trademarks, copyright infringement, and data security are non-issues. It’s 100% kosher.

My intent behind Banned Bluebook is to demonstrate two points to Dean Miller and the Yale administration:

Dean Miller, I humbly request that you, on behalf of Yale, either uphold or deny students’ right, under school policy, to build software like Banned Bluebook.

If Yale affirms this right, I’d like you to publicly apologize for the events that have transpired over the last week, including Yale’s censorship of CourseTable and the pattern of hypocrisy we’ve seen in Yale’s copyright enforcement of course data.

If Yale denies this right, I’ll see you at the punishment committee.

(UPDATE: This post hit #1 overall on Reddit and #1 on Hacker News. This essay was read by over half a million people within 24 hours.)

(UPDATE 2: Dean Miller responded with a second open letter: “Just this weekend, we learned of a tool that replicates YBB+’s efforts without violating Yale’s appropriate use policy, and that leapfrogs over the hardest questions before us. What we now see is that we need to review our policies and practices”.)

(UPDATE 3: The New York Times and The Washington Post covered the story) 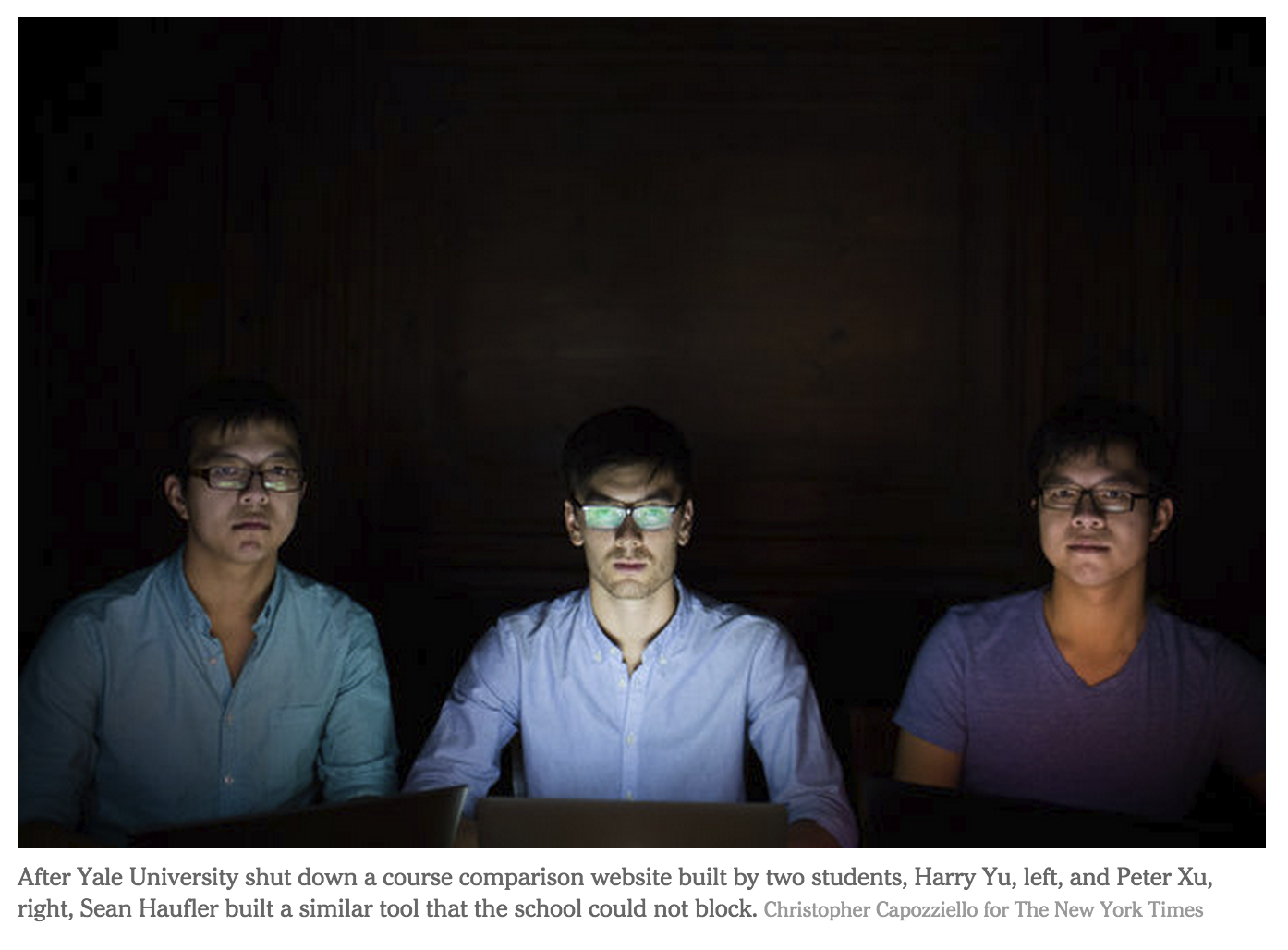 (UPDATE 4: President Salovey launched a Task Force on Data Access just seven days after I wrote this piece. I’m proud of Yale for moving so quickly on this.)

(Addendum: If you are looking for a Poshmark bot to help you sell more inventory, try out my tool ClosetPilot). Read more about how to become a better seller in our article on Poshmark tips..