Snapchat isn’t localized to high schools anymore. During the fall term, Snapchat use exploded amongst Yale undergrads. After viewing Snapchat’s rampant growth on Yale’s campus firsthand, I understand why Snapchat’s features are compelling and why it’s growing so damn fast.

Snapchat is growing faster than you think

In September, virtually no one at Yale used Snapchat. Today, it’s huge. To measure Snapchat’s penetration, I went through my phone contacts and counted up all the Yale students who had accounts. 97 out of the 157 Yale undergraduates in my phone have Snapchat accounts. Assuming my contacts are representative of the Yale population 1, then nearly two-thirds of Yale uses Snapchat.

Snapchat’s viral growth within the Yale community is especially impressive when you consider that the platform has no content. There’s no Facebook wall or Instagram feed to consume - rather, people sign up for Snapchat because it’s a better way to communicate. When sending personal notes, Snapchat’s transient messages and group messaging functionality cultivate more captivating experiences than text or picture messaging.

Snapchat’s time limits make snaps more engaging. Since snaps disappear seconds after they are opened, users feel comfortable sending spontaneous and personal messages that they would not want ingrained into digital histories. Sending a headshot to a friend via text feels forced, but sending a warm gaze or a silly face via Snapchat is natural. Snapchat pictures tend to be candid and unprepared, which makes the messages feel more personal, more real. Additionally, since every message has a time limit, users are present when opening snaps. Snapchat attracts its users’ full attention since they have only a few seconds to capture the details of each message. This engagement makes the experience more satisfying - it feels like a real conversation. Interestingly, Snapchat maintains the feeling of a one-on-one conversation even when messaging groups.

Here’s the secret sauce to Snapchat’s viral growth: its group messaging functionality. When a user sends a snap to multiple friends, the recipients receive a snap indistinguishable from an individualized message. In effect, mass snaps feel personalized. This is the holy grail of messaging platforms: evoking strong emotion with minimal friction. Consider this emotion/friction matrix:

Snapchat improves the messaging experience because it minimizes the inhibitions of texting.

The virality of a messaging platform equals its emotion-friction ratio, and the Snapchat paradigm maximizes this virality coefficient. A Snapchat of a funny face will evoke a visceral reaction in the recipient before they have time to consider the meaning behind the message. Conversely, when someone receives an MMS, the first thing they see is the recipient list. Users immediately dissect mass text messages before experiencing them. To solve this problem, Snapchat is intentionally ambiguous. Since the meaning behind a snap is opaque, Snapchat alleviates senders’ social inhibitions. This is revolutionary: by altering the social dynamics of digital messaging, Snapchat created an atmosphere in which people share more openly.

Have you ever felt self-conscious about your ‘texting ratio’ after you send three or four texts without a response? Snapchat has no messaging history; it relieves insecurities about message imbalances. Problem solved.

Have you ever sent someone a joke via text then feel insecure after not receiving an immediate response? You read and re-read your message, thinking ‘How did (s)he interpret my text? Was my joke funny?’ In Snapchat, you can’t read your sent messages, so there’s no past correspondence to dwell upon. Problem solved.

Snapchat improves the messaging experience because it minimizes the inhibitions of texting. To grow further, Snapchat needs to concentrate on what it does best: frictionless messaging. That said, I’m disappointed that Snapchat is building social networking features.

Snapchat’s biggest mistake is having public profiles. Every Snapchat user has a public leaderboard listing the usernames of their best friends - the people with whom they exchange the most snaps. Snapchat is successful because the platform reduces the social inhibitions of messaging. However, the leaderboard is directly counterproductive to this goal. Consider the public outrage that would occur if Gmail made public leaderboards for all its users. What if iMessage did the same? By posting users’ messaging trends publicly, Snapchat violates the spirit of ephemeral messaging (and private messaging in general). Luckily for Snapchat, these public profiles are not very discoverable from within the app, so most users are unaware of the functionality. 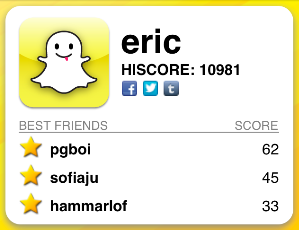 I recently told a friend about Snapchat’s public profiles. She had sent and received over sixteen thousand snaps, and she had no idea that public profiles existed. She became embarrassed when she realized I could see how many snaps she had been sending. Snapchat should remove public profiles immediately. After Facebook built their own Snapchat clone, Snapchat can’t afford to make any more mistakes lest they lose market share to the tech giant.

(UPDATE: After speaking with the Snapchat founders, they agreed to remove the number totals from Snapchat best friend lists. They have, however, retained the best friends feature.)

Barriers to entry in technology are crumbling. With modern tools, a novice engineer can build a simple social networking app in a matter of hours. Facebook built and launched a Snapchat clone in only twelve days. In the social networking space, revolutionary products aren’t those with the most advanced technology. Revolutionary products are those that are best at leveraging technology to change, and hopefully improve, people’s behavior.

Snapchat, with auto-destructing messages and group snaps, creates an atmosphere in which people want to share more. In effect, Snapchat is helping to solve a huge problem: timidness. It may not have built a persistent, searchable social graph, but if there’s any company that allows its users to feel ‘more open and connected’ with others, it’s Snapchat.

Thanks to Nick Patrick, Emma Tangoren, and Aayush Upadhyay for reading drafts of this essay.

(UPDATE: Thanks to Jenna Wortham for interviewing me for her New York Times piece on Snapchat. It’s the first article in the mainstream press that focuses on the app’s social dynamics instead of sexting.)